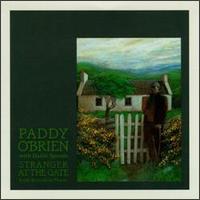 Stranger at the Gate

Paddy's first solo CD, recorded in 1998, features a few of his own compositions, including "The Foxhunters' Chorus," "The March of the Gaelic Order," "Tiny the Trooper," and "The Girls of Knocknagow." With piano accompaniment by Dáithí Sproule, and a special guest appearance by Paddy's wife, Erin Hart, singing "The Wounded Hussar," with accompaniment by Karen Andersen.

SORRY, CDS ARE OUT OF STOCK AT PRESENT

WHAT THE CRITICS ARE SAYING...

“Imagine riding in a schoolbus with a bunch of teenagers returning late at night from a game—and the driver decides to floor the gas pedal while descending a hill on a winding road in rural New England. (This is a personal recollection that I bring to mind). That's the best analogy I can think of the momentum Paddy's music seems to have—a mixture of glee, sheer joy, excitement, terror, and wonder all combined into one. I don't play the button accordion, but I would assume that O'Brien is one of the primary inspirations to people that do. Or should be.” — Amazon customer review

Save this product for later
Display prices in: USD