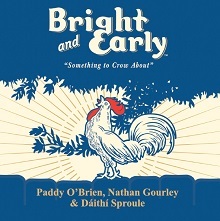 After playing together in The Doon Céilí Band and O’Rourke’s Feast, Paddy and Nathan started getting together to work on individual tunes they liked, pairing melodies for their own satisfaction. Finally, they decided to record a CD, encompassing the revival of old tunes reinterpreted and played tightly together on fiddle and box, and adding some musically engaging accompaniment from guitarist Dáithí Sproule. The tunes selected for this recording were taken from the repertoire of players such as Tommy Potts, Ed Reavy, Johnny McGreevy, and some lesser-known but wonderful musicians like Tom Ginley of Belfast, and Francie Brereton of Tipperary, to name just a few of the influences.

What the critics are saying...

“I love this stuff, it flows like water, wraps itself around my soul and makes all the daily troubles go away, exactly what good music is supposed to do.” — Jack Baker, Irish American News

“...pure accordion plus fiddle. The dynamics remain the same throughout, so it’s the responsibility of the individual tunes to create different emphases, and this is done with beautiful melody phrases or unusual changes of key...” — kuec, Celtic-Rock.de

“...the music on this album is first rate throughout, from beginning to end... in all cases, the tempos and swing are just right, and full of warmth and grace... an entirely compelling album." — Daniel Neely, The Irish Echo

All tunes traditional except where indicated.

Save this product for later
Display prices in: USD